Look closely at the picture of a magnificent switchboard, as it emerged fresh from the factory in the late 1960s. Do you notice anything unusual? Yes, that’s it. There are no doors to cover the contactors. In fact, there’s not much in the way of an enclosure – the contactors, overloads and fuses are simply mounted on metal panels with nothing to prevent or even impede accidental contact with live parts! How can this be? Haven’t they heard of health and safety? 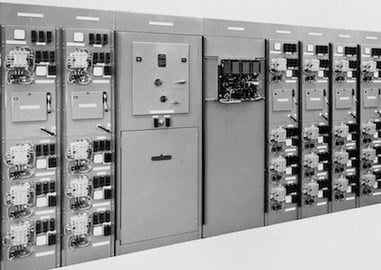 In fact, switchboards of this type – usually referred to as “open type” boards – were common in the 1960s. As an apprentice, I worked on many of them. They were popular with end users as they cost less than fully enclosed switchboards and because, I was told, it was possible in an emergency to hold a faulty contactor in the closed position using a broom handle so that the associated process step could complete!

But what about the shock hazard? Well, things were different in the 1960s. First of all, there was no Health and Safety at Work Act, and those regulations that did exist were much more relaxed – shall we say –       than their present day counterparts. Also, these open type switchboards were installed in locked switchrooms that only authorised persons were allowed to enter.

Finally, those authorised persons were highly skilled and fully trained. They understood the risks associated with exposed switchgear and how to work safely with it. That’s not to say that accidents couldn’t happen; even the most skilled of engineers and technicians can stumble, but during my time working on this type of equipment, which must have spanned about five years, I never heard of a serious accident.

I don’t think open-type switchgear will be making a comeback any time soon – can you imagine the reaction of the HSE? But in its day, it did the job it was designed for, it did it cost effectively and it did it well.

Check out some previous stories from Keith on his time as an apprentice...

I'm stuck on you!