The girl who reached for the stars

To coincide with 100 years of (some) women getting the vote in the UK, we've been celebrating the #Vote100 milestone by publishing a series of blog posts that feature truly remarkable lives and inventions of women in STEM. Our second in a series of four focuses on Dame Susan Jocelyn Bell Burnell...

Born in 1943 in Belfast, Jocelyn Bell Burnell is today a well-known astrophysicist. Her career shone early on, when as a research assistant, she helped build a large radio telescope and, during her research, she discovered pulsars. Her discovery, although at the time wrongly attributed to her supervisors, offered the first direct evidence for the existence of rapidly spinning neutron stars. 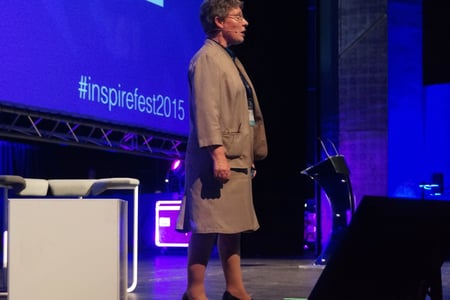 Jocelyn Bell Burnell had a keen appetite for learning from an early age but experienced difficulty in school and failed an exam intended to measure her suitability to study for higher education. But she persevered and went on to study at a Quaker boarding school, where she quickly distinguished herself in her science classes. Having now proven her aptitude for higher learning, Bell Burnell attended the University of Glasgow, where she earned a bachelor’s degree in physics in 1965.

That same year, she began post-graduate studies in radio astronomy at the University of Cambridge. One of several research assistants and students working under astronomers Anthony Hewish, her thesis advisor, and Martin Ryle, over the next two years she helped construct a massive radio telescope designed to monitor quasars.

From 1965 to 1967 Bell Burnell was tasked with analysing the data produced by the new telescope. After tirelessly analysing the charts, she noticed some anomalies that didn’t fit with the patterns produced by quasars and called them to Hewish’s attention. The research team began looking into her discovery and they eventually deduced that the patterns were made by neutron stars, fast-spinning collapsed stars that were too small to form black holes. The new entities were named pulsars, for pulsating radio stars.

In 1968, Bell Burnell earned her PhD in radio astronomy from Cambridge University, making her a member of a very small band of women achieving doctorates at that prestigious university.

Six years later, in 1974, her PhD supervisors received the Nobel Prize for Physics for their work. Many voices in the scientific community raised their objections, believing that Bell Burnell had been unfairly snubbed. Bell Burnell herself has played down this controversy by saying: "I believe it would demean Nobel Prizes if they were awarded to research students, except in very exceptional cases, and I do not believe this is one of them."

To this day, Bell Burnell is still to receive the recognition she deserves from the Nobel Prize committee. Undeterred, she continued to have an illustrious academic and research career and was appointed CBE (Commander of the British Empire) in 1999, and subsequently promoted to DBE (Dame Commander of the British Empire) in 2007. She also won the Oppenheimer prize in 1978 and the 1989 Herschel Medal from the Royal Astronomical Society, which she served as president from 2002 to 2004. She was president of the Institute of Physics from 2008 to 2010 and has served as president of the Royal Society of Edinburgh since 2014.

Jocelyn Bell Burnell’s discovery has helped shape modern astronomy. But perhaps more importantly, her determination and resilience have paved the way for other young women to look up and reach for the stars!

Read our previous post on Hedy Lamarr - more than just a pretty face! Or the next one on Hypathia - the first woman in STEM.